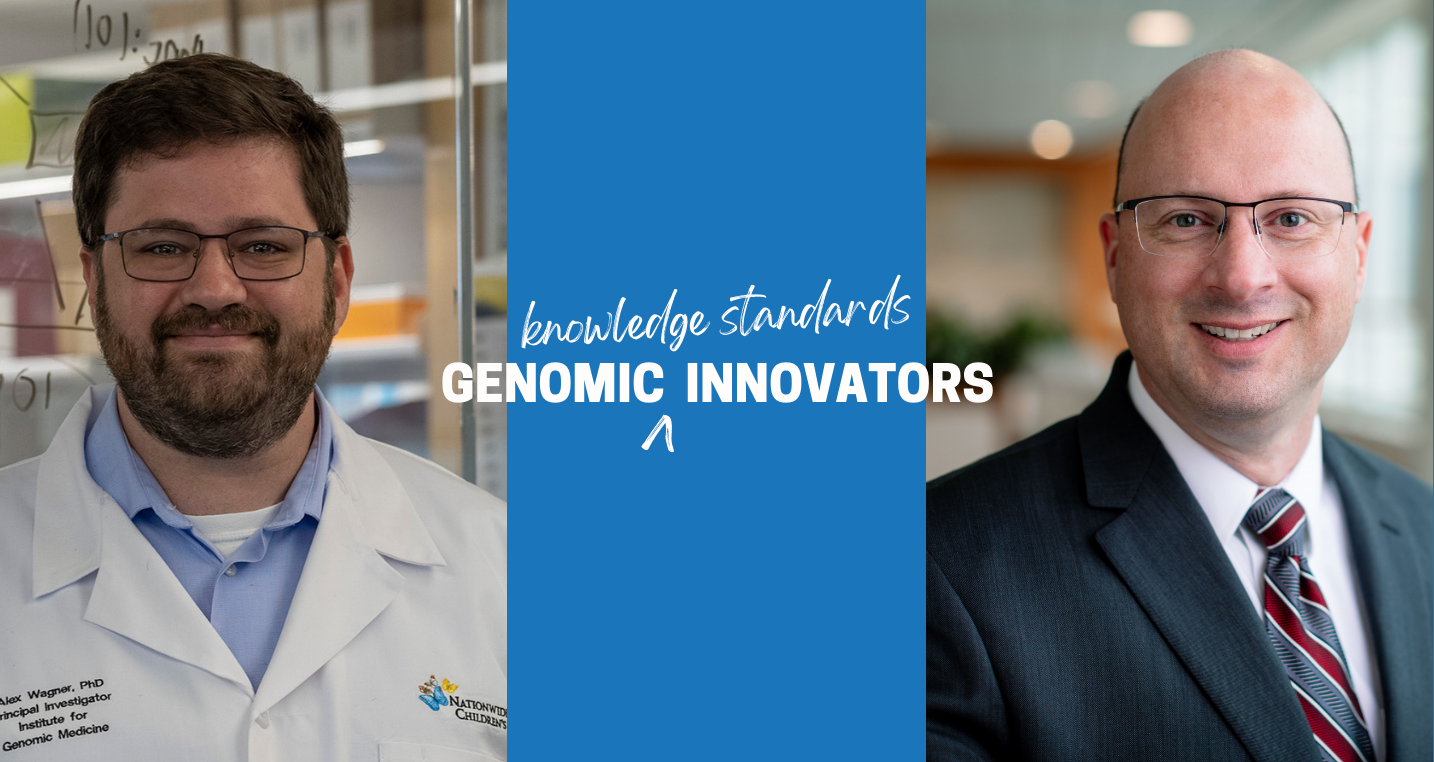 Two leaders within the GA4GH Genomic Knowledge Standards (GKS) Work Stream have each been awarded a Genomic Innovator Award from the National Human Genome Research Institute (NHGRI) in recognition of their contributions to impactful consortia-based team science.

Robert Freimuth, an Associate Professor of Biomedical Informatics at Mayo Clinic, and Alex Wagner, an Assistant Professor at Nationwide Children’s Hospital and the Ohio State University, each received a 5-year, early-stage investigator award that provides flexible funding to support their ongoing research into the most pressing and rapidly-evolving challenges facing genomic science. Their awards will help them drive the coordinated development of GA4GH standards for the exchange of knowledge between genomic knowledgebases, electronic health records, and other clinical systems.

Wagner’s award will support his efforts to build a generalized genomic knowledge framework that can represent the complex relationships between genomic variant knowledge and evidence across multiple domains. Freimuth will use his award to develop technologies, built in part on GA4GH products, that will enable more seamless integration of genomic data within both research and clinical settings.

As a member of the Mayo Clinic’s Center for Individualized Medicine (CIM), Freimuth leads the development of systems to enable the integration of genomic test results into the Electronic Health Record (EHR) and the delivery of genomic-based recommendations to the point of care through EHR-integrated clinical decision support and apps.  His research program focuses on developing scalable infrastructure that facilitates the use of genomic data for clinical practice.

Wagner’s research program focuses on the standardized representation of genomic knowledge. His expertise in this area stems from his role in creating the Clinical Interpretations of Variants in Cancer (CIViC) knowledgebase, and later the harmonization of that content with other knowledgebases through the Variant Interpretation for Cancer Consortium (VICC), a GA4GH Driver Project.

“Unfortunately, many of the genomics standards in use today were developed primarily to meet either research or clinical use cases, and it can be difficult to use different standards together,” said Freimuth, who co-leads the GKS Work Stream. “For instance, there is a significant gap in our ability to capture clinical genomic interpretations as standardized, structured data that are linked to computationally unambiguous representations of genomic variation.”

Wagner, who serves on the GA4GH Steering Committee as Director of VICC, concurred: “There are major gaps in the field resulting from heuristics the community has agreed upon to cover the most common cases. But standardized computational representation of molecular variation is critically important to scaling genomic medicine.”

Both researchers—who first met through GA4GH, and have become close collaborators and friends—see the work of the GKS Work Stream as an important foundation for filling those gaps. The current focus of GKS lies in the evaluation and definitions of forward-looking formats and implementations for representation and annotation of genomic variants.

Wagner co-leads the development of the flagship GKS standard, the Variation Representation Specification (VRS; pronounced “verse”), which provides a flexible framework of computational models, schemas, and algorithms to precisely and consistently exchange genetic variation data across communities. He also leads the development of an emerging framework called VRSATILE (pronounced “versatile” — VRS Added Tools for Interoperable Loquacious Exchange), which aims to advance standards for representing genomic knowledge while keeping a pragmatic view of how knowledge is stored and exchanged today.

For his part, Freimuth sees the award as an opportunity to drive interoperability across disparate standards organizations, such as Health Level 7 (HL7). Freimuth co-chairs the HL7 Clinical Genomics Working Group, which develops Fast Healthcare Interoperability Resources (FHIR) specifications for clinical genomic tests.  The Genomic Innovator Award will support his work on the integration of GA4GH and HL7 standards.  “GKS is developing technologies that will fill gaps in clinical standards like FHIR, ultimately improving our ability to use genomic data for patient care,” said Freimuth.

“Incorporating GA4GH products  into FHIR and other standards for clinical data exchange is a metric of our success,” said Wagner. “Our awards support complementary activities for the development and application of a genomic knowledge framework that can interface between EHR and clinical variant knowledgebases.”