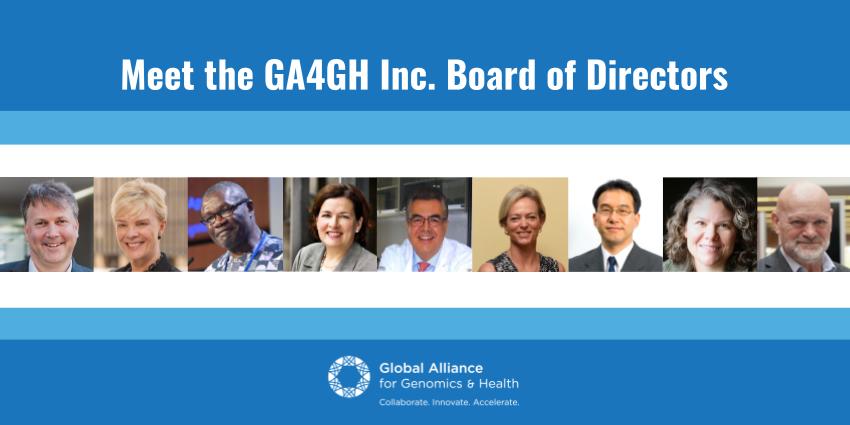 Barcelona, Spain — GA4GH Inc., the Canadian non-profit corporation associated with the Global Alliance for Genomics and Health, has announced the appointment of five new members to sit on the Board of Directors.

Goodhand announced the new Board of Directors during remarks at the organisation’s 10th Plenary meeting held in Barcelona, Spain. The board will advise the Global Alliance in its mission to accelerate progress in genomic research and human health by cultivating a common framework of standards and harmonised approaches for effective and responsible genomic and health-related data sharing.

The new Directors introduce a broader range of expertise to the board of GA4GH Inc. and also drastically expand its geographic scope:

The majority of the new GA4GH Inc. Directors were nominated by the GA4GH Core Funders Forum, a group of representatives from funding agencies that support GA4GH with at least $200,000 USD annually for three years or more. Together, the Core Funders Forum and the GA4GH Inc. Board of Directors serve as key strategic advisory bodies of the overall Global Alliance. The GA4GH Standards Steering Committee and an open nomination process in early 2022 put forward the additional Directors.

The GA4GH Inc. Board of Directors provides specific oversight to the management of the activities and affairs of GA4GH Inc. through two primary duties: a fiduciary duty and duty of care to the not-for-profit corporation.

All Directors serve as the members of GA4GH Inc. and complete at least one three-year renewable term, for a total of no more than nine years.