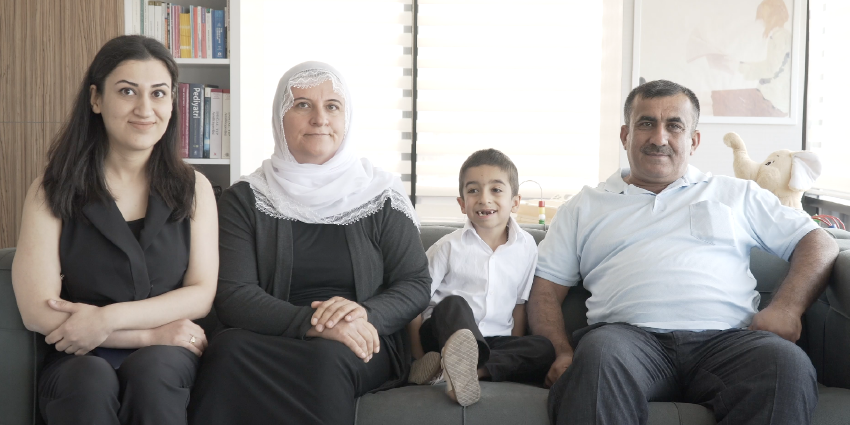 The European Joint Programme on Rare Diseases (EJP RD) is a GA4GH Driver Project working towards the advancement and innovation of rare disease research, funding, diagnosis, treatments, and clinical trials. The Driver Project recently shared the story of a patient named Yakup, whose family had spent years searching for answers to a set of neurological symptoms that afflicted him since birth. Yakup’s family had already experienced a loss because of this mysterious disease: his oldest brother passed away with similar symptoms several years ago.

Yakup and his family underwent genetic testing through a research study called CONSEQUITUR, to identify the cause of his disease. Their genetic samples were then analyzed and shared with the RD–Connect Genome Phenome Analysis Platform (GPAP)—a resource originally developed within the EU project RD-Connect and now included as part of the EJP RD. The GPAP allows researchers and clinicians around the world to collaborate in the genetic diagnosis of rare disease patients by providing a user-friendly interface for analyzing phenotypic and genomic data together. The platform facilitates a multidisciplinary approach, in that several researchers and clinicians from different fields, institutions, and countries can collaborate on one patient’s case to identify the underlying cause of disease.

“The RD-Connect platform is an online system that enables researchers and clinicians to diagnose rare disease patients,” said Sergi Beltran, who leads the Bioinformatics Unit at the National Center of Genomic Analysis (CNAG-CRG) and is a Champion representing the EJP RD as a GA4GH Driver Project. He also indicated that “it is essential to share data to improve and accelerate diagnosis; if a clinician or researcher has sequenced a patient’s genome or exome and cannot reach a diagnosis, others might be able to do it or will have similar cases to support new findings.”

In the context of rare disease, data sharing and genetic testing can give families a final molecular diagnosis, as it did for Yakup and his family. This helps doctors to tailor treatment to their specific disease and allows families to better plan for the future.

“Data portray knowledge, and so it is imperative that we find ever-better ways to share and utilise the wealth of research and healthcare data being routinely generated to help understand and treat disease,” said Anthony Brookes, who is also a Driver Project Champion representing the EJP RD and who leads Health Data Science activities as a Professor of Genome and Bioinformatics at the University of Leicester. “Tackling Rare Disease this way is becoming increasingly possible, but improvements in handling ethical and legal issues, as well as better technical and data standardisation, are still needed if we are to complete this mission.”

The EJP RD joined GA4GH as a Driver Project in 2019 because of the efforts put forth by GA4GH to standardize genomic and health data sharing across institutions, countries, and professions. The EJP RD collaborates via active contribution in many of the GA4GH Work Streams, such as the Regulatory and Ethics Work Stream and Clinical and Phenotypic Data Capture Work Stream, to develop standards that meet rare disease data sharing needs.

“We think that the collaboration between the EJP RD and GA4GH is already very successful,” said Beltran. “In the GPAP and other resources included in the EJP RD we are using and adopting many of the GA4GH standards such as Beacon, Phenopackets, htsget, Read File Formats, and Genetic Variant Formats. We are also expanding the involvement of the EJP RD to engage with all of the GA4GH Work Streams in the development of future standards.”