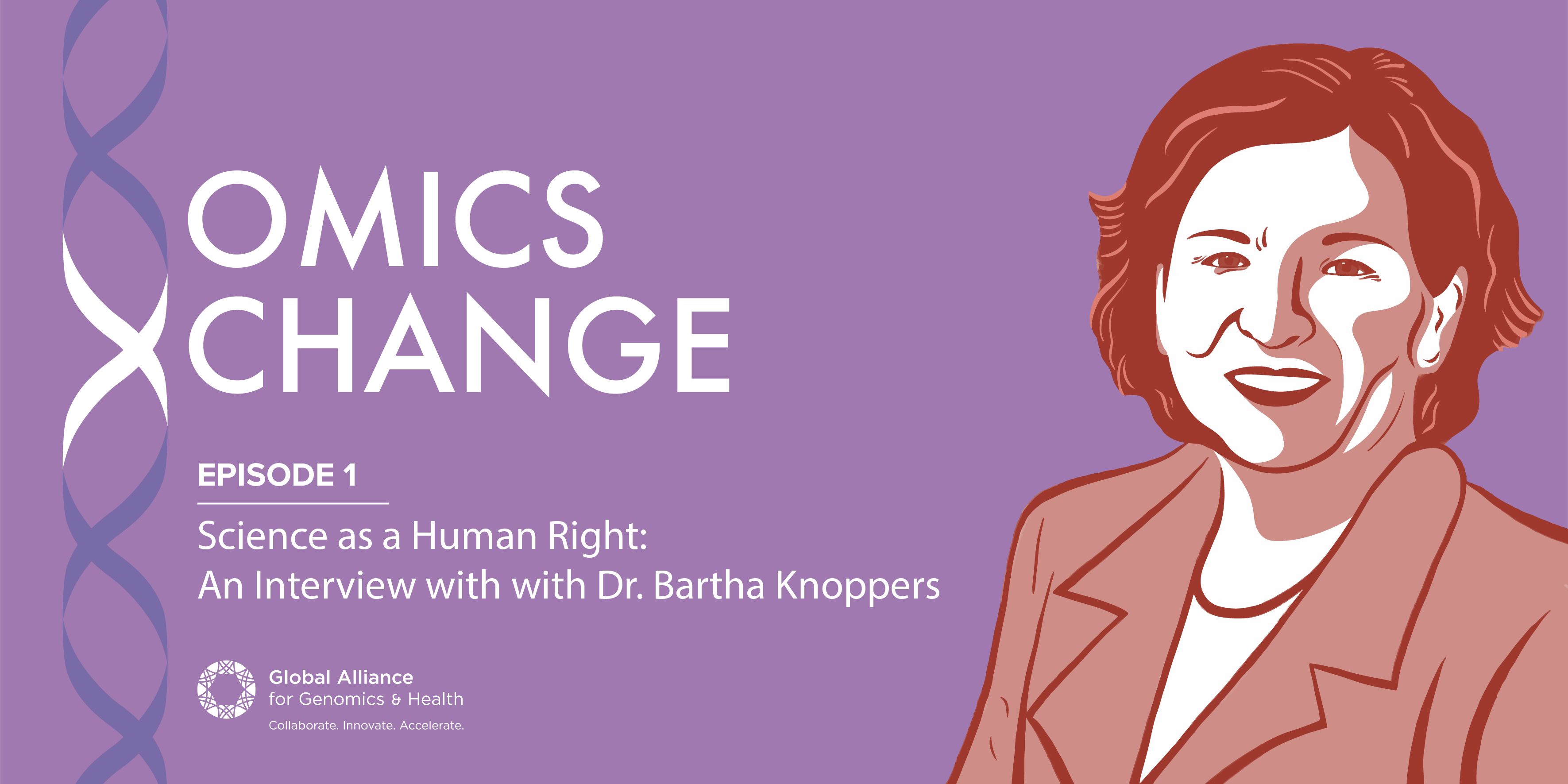 December 10 is International Human Rights Day. For our first guest here on the OmicsXchange Podcast produced by GA4GH, we are talking with Dr. Bartha Knoppers – professor of human genetics and the director of the Center of Genomics and Policy at McGill University – on how article 27 of the 1948 Universal Declaration of Human Rights is important for global genomic data sharing.

Angela Page: 71 years ago today, the United Nations General Assembly adopted the Universal Declaration of Human Rights. Today, we’re talking with Dr. Bartha Maria Knoppers, who is a professor of human genetics and the director of the Center of Genomics and Policy at McGill University. She holds a doctoral degree in comparative medical law from the University of Paris. Dr. Knoppers founded the Population Project in Genomics (P3G) and CARTAGENE, which is Quebec’s population biobank. She’s chaired multiple institutional ethics working groups, including those of the International Cancer Genome Consortium, the Thousand Genomes Project, the Human Cell Atlas, and, most notably to us, the Global Alliance for Genomics and Health Regulatory and Ethics Work Stream. This International Human Rights Day, we are speaking with Dr. Knoppers to learn more about how article 27 of the 1948 Universal Declaration of Human Rights is important for global genomic data sharing. Welcome, Dr. Knoppers! Why don’t you start us off by explaining what Article 27 actually says?

Dr. Bartha Maria Knoppers: Article 27 states that everyone has the right to freely participate in the cultural life of the community, to enjoy the arts and to share in scientific advancement and its benefits. It has a second article that’s often forgotten: Everyone has the right to the protection of the moral and material interest resulting from any scientific, literary, or artistic production of which he is the author. So this right has the right to science and the right to be recognized as an author and inventor. So in that sense, it balances the trust of science to make data freely available, at the same time recognize human inventiveness.

Angela Page: You have referred to it as a previously dormant right, Article 27. Can you explain why that is or why that was overlooked and how you dug it back up and dusted it off for this purpose?

Dr. Bartha Maria Knoppers: Yeah, I’ve been a law professor for 23 years before I moved to the Faculty of Medicine here at McGill University. And I took international law, I remember the declaration, but I don’t remember this article. And it was an article in Science Magazine published by the American Association for the Advancement of Science in June 2013, called a human right to science. I thought what? So I started digging, and I found out that this article 27 of the Declaration, which is a declaration of the United Nations, was actually adopted as an official—if I can use a non legal language—official International Covenant on Economic, Social and Cultural Rights in 1966. So I thought, wow, there’s this right in Article 15 of the covenant that looks like the exact wording of the article 27. And that was the purpose of the editorial in science and the AAAS was to start thinking, how can we activate this right – how can we go beyond ethics and national legislation? How could we make this a right that everyone can have the freedom of science, benefit from the science and be recognized for their contribution to the science.

Angela Page: So you noticed these multiple references to article 27, but was it being upheld in any way?

Dr. Bartha Maria Knoppers: So a colleague in Cambridge University Professor Rumiana Yotova and I decided to look at all the reports that when countries sign and ratify, they become a state party, they have to report every few years to the United Nations. What have they done to realize this right? So we started looking through reports and we didn’t find very much from since 1966. But then we started noticing around the 1990s when the internet became more widespread, references to data sharing, access to data, international collaboration with respect to data, and realized that this was actually could be the foundation for promoting the right of everyone to benefit from science. We found out that UNESCO in 2009 had already issued a statement called the Venice statement on the right to enjoy the benefits of scientific progress and its applications, and somehow that had laid dormant as well. So beginning there, we thought, let’s find a way to activate this right in a way that can be universally applicable.

Angela Page: You saw this article in 2013, which is the same year that GA4GH was founded – were those coincidental streams, or were you looking for it or…

Dr. Bartha Maria Knoppers: No, I was not looking for it. It was a eureka moment, let’s put it that way. And I thought, how do we make the Global Alliance for Genomics and Health—the GA4GH—how can we catapult it into a new way of thinking? And that’s why the Framework for the Responsible Sharing of Genomic and Health Related Data that was written for GA4GH, and part of its mission, part of its constitution, actually is founded on this dual right of freedom of science, slash benefit, and a recognition.

Angela Page: So you’ve shared this journey of Article 27, going from a dormant right to gaining more recognition within the scientific community. Do you feel that something’s changed, that the community is now starting to think about science in terms of this foundation of human rights?

Dr. Bartha Maria Knoppers: It’s coming along – it’s very slow. You know the law, give any – even a bill that you want to have become, give it 10 years. I was part of a Royal Commission on reproductive technologies – we had it in our report in 1993 in Canada, we didn’t see a law till 2004. I’m not saying that we need a law, what we need are of frameworks, policies, directives from governments from the European Commission and so on that start repeating this right, that start entering it in into common culture, common parlance.

Angela Page: So I’ve also heard you say that the benefits of data sharing outweigh the risks. Explain that a bit more for us.

Dr. Bartha Maria Knoppers: There are enough scandals of data leaks. There’s the Cambridge Analytica, there are huge monopolies on data and how data is shared and people have access to it. But I think that sort of phobic protectionism – presuming that people at all costs want privacy, and they may I mean, they may, with respect to not having their children photographed or not being subject to advertising without spam and the rest of it.

Angela Page: And we know these kinds of scandals are scary to the public; we all hear about people being hacked or having their personal data accessed without their permission. But I’m curious how sharing genomic data is maybe unique.

Dr. Bartha Maria Knoppers: I presume that most people want to have the benefits of sharing medical data and I say that because that medical data is about them, it’s about others, but it’s about human beings. And the more that we understand how our situation, our health slash disease state, fits into that of others, the more we can understand how to prevent and to treat. So I go from the opposite assumption. I don’t presume it’s risky. I presume it’s beneficial.

Angela Page: So given the benefits and risks, how do we enter data sharing into the “common parlance, common culture,” as you mentioned before? How do we address people’s concerns while also moving science forward?

Dr. Bartha Maria Knoppers: I think we should not be naive, and I think we need to respond to the legitimate concerns of individuals when it comes to data sharing, especially data sharing across countries, across borders, and, and so on, and different cultures and different environments. Genetics has always been associated with the potential for discrimination, and there has been discrimination. And so you can see that like reproductive information before it had a stigma to us. So when you set out a Framework for the Responsible Sharing of Genomic and Health Related Data, which is the Framework of the Global Alliance, you want to both move data sharing forward, but also respond to those concerns. So the Regulatory & Ethics Work Stream prepared specific policies for addressing those concerns. So there’s a data privacy policy, there’s a consent to data sharing policy, there’s an accountability policy, which by the way includes the question or the issue of if you have consented for sharing data, why are you not sharing, which is an interesting interpretation of accountability. And these policies continue and are revised over time to respond to different ways of, of data sharing, and the need for different kinds of consent as, as genomic data enters the medical, the health field and the health treatment and prevention spheres. We try to prospectively anticipate what the ethics and governance and legal issues may be.

Dr. Bartha Maria Knoppers: Our primary challenge in the last year has been how do we serve as a motor to encourage researchers in Europe, who are now subject to the General Data Protection Regulation—very heavy handed approach to data security and data privacy And on the face of it, it could easily be interpreted to say, you need an explicit consent for everything. But if you do a proper reading of it, and a lot of the legal beagles in the GA4GH, as well as their bioethics colleagues, and so on, have started looking at it and saying, how do we interpret this in a way that does not make data go back to data hoarding, data silos? That was the way that the genomics community worked pretty well before the map of the human genome. How do we not lose the momentum of data sharing and continue to share internationally? I mean, it’s so important. And that brings me to the second big challenge. Does our health system have sufficient diversity in the genomic information it has access to, to be able to interpret a particular patient’s symptoms or prevent those symptoms, when most population reference databases are 81% Caucasian. So our second challenge after facing the General Data Protection Regulation and a seemingly restrictive approach to data sharing, is to integrate more diverse data into our databases to properly represent modern heterogeneous populations. Because we can’t ever achieve genomic medicine for all in a democratic sense, in a scientific sense, we can’t do proper genomic medicine if we don’t have that kind of diversity of data used in the clinical setting.

Angela Page: Well, thank you so much, Dr. Knoppers, this has really been a great conversation and we appreciate having you. This Human Rights Day, we want to remember that article 27, along with the rest of the Universal Declaration, includes ALL people. Regardless of health status, gender, race, country of origin, or any other factors, everyone everywhere has the right to benefit from scientific advancement, and to be recognized for their contribution.